We are an official travel partner of British Cycling, the national government body of UK cycling.  Together with British Cycling, we are committed to getting more people on bikes and to spread the love we have for riding. Whether you treat cycling as an activity, pastime, sport or mode of transport, we want you to love cycling as much as we do.

1 IN 8 GOES FREE ON ALL GROUP BOOKINGS
Take a free space on us for all bookings of 8 or more (Please note that this offer can not be combined with any other offer or discount). 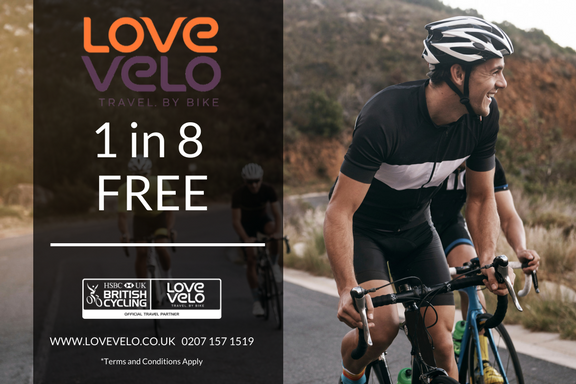 Hello all, I hope that nobody minds me posting this.
I am James from J.E James Cycles in Rotherham and I have been speaking with a club member in store today who has informed me that some of you my be interested in some support from ourselves in the way of events such as, maintenance courses, Garmin information/how-to sessions etc.
Would anyone be interested in any of the following courses?
(free of charge of course)
Any other ideas would be welcomed- we want to support our local club.
P.S The next drop of Wheelers team kit is due at the end of February, an event around then would tie in nicely.
Thanks

You can vote below

Following discussion at the Wheelers’ AGM on 30 January 2018,  members decided to maintain club subscriptions at £15 for full members and £7:50 for junior and 2nd claim members.

Subscriptions are now due and I would be grateful if members could arrange to pay as soon as possible.  Payment should  be made to me by cash or cheque (payable to Rotherham Wheelers Cycling Club) at any club meeting, club ride or at my home address.  Alternatively, members may pay by electronic transfer to the club account, details of which are unchanged and available from me on request.

Being the start of the new year, club subscriptions are now due for payment. However, as the subscription rate has to be formally agreed at the AGM (which isn’t until Tues 30:1:18) and in order to keep admin to a minimum, I will not be accepting subscriptions before the AGM.
As in previous years, as well as cash or cheque, it will be possible to pay subscriptions electronically, but members are asked not to do so until after the AGM.
Many thanks
Dave Buxton
By Dave Buxton|2018-01-01T17:16:33+00:001st January, 2018|Uncategorised|Comments Off on RWCC – payment of subscriptions 2018
Read More

For information of all members, the proceeds of the raffle at this year’s Christmas Function / Annual Presentation Evening amounted to £165.  I’ve posted off cheques for £82.50 to MIND and the NSPCC which are worthy causes and are our Chairman Steve Viney’s charities this year.

Thanks to all member’s and our sponsor JE James Ltd for your generosity in purchasing tickets and donating prizes.

This year’s Wheelers Christmas event / Annual Presentation Evening will be held THIS FRIDAY (8 December 2017) at the Three Horseshoes, Bawtry Road, Wickersley starting at 7:00pm for 7:30pm.  The event will be held in the first floor function room, access to which is via a staircase just inside and to the left of the main entrance.  I suggest that we meet in the bar downstairs before making our way upstairs for our meal at around 7:30pm.

It has been suggested that we run a raffle during the course of the evening, the proceeds to be donated to MIND and the NSPCC.  JE James Ltd have donated a raffle prize and several members have already pledged prizes.  Whilst donation of raffle prizes is entirely voluntary and will be anonymous, I’ve written to all members attending the function to invite you, if you wish to do so to donate a raffle prize and help to raise money for these worthy charities.

I look forward to seeing you all on the night.

The following nominations have been received for this year’s John Atkinson Trophy:

As previously circulated, the award will be decided by secret ballot to be held at the general meeting to be held at the Three Horseshoes public house, Wickersley at 19:00 Monday 13 November 2017 and the trophy will be presented at the Christmas Function / Presentation Evening on Friday 8 December 2017.

It is hoped that as many members as possible will attend the meeting and participate in the ballot.

If you wish to cast a vote, but are unable to attend the meeting, you may still do so by notifying me of your preferred candidate by email by NO LATER THAN 17:00 Monday 13 November 2017.   I will ensure that all votes so received are printed and handed to the returning officer (Ian Wortley) for posting in the ballot box.  Votes received after 17:00 will not be counted.

This year’s Rotherham Wheelers Christmas Event and Presentation Evening at the Three Horseshoes, Wickersley is now just 5 weeks away and we are busy finalising arrangements to make it an enjoyable and memorable evening.
I have emailed all members attending a copy of the menu, so please check your in trays.  To keep things simple, I propose that we all eat off the 3 course menu which provides a choice of 3 x starters, 6 x mains (including a vegetarian option) and 3 x desserts.
In order that I can confirm our order, I would be grateful if you could notify me of your menu selections and any special dietary needs by no later than Saturday 25 November.
You will see that the cost of the 3 course menu is £13:49 per head with a £1:50 supplement for the rump steak option.  As the ticket price for the event was set at £15:00 per head, I propose that any cash remaining will be spent on pigs in blankets and stuffing balls to accompany our main courses.
If you have not yet paid the balance of ticket price, I would appreciate it if you could do so by no later than Saturday 25 November.  Payment may be made by cash or cheque (payable to Rotherham Wheelers Cycling Club), to me in person or to my home address.  If you prefer, payment may be made by electronic transfer to the club account (details available on request).  If you pay electronically, please drop me an email to confirm that you have done so.
By Dave Buxton|2020-03-11T17:00:56+00:0031st October, 2017|Uncategorised|Comments Off on 2017 Christmas Event and Presentation Evening
Read More

You should already be aware that the 2017 Rotherham Wheelers Presentation Evening and Christmas Social will be held on Friday 8 December 2017 at the Three Horseshoes Public House, Wickersley.

Amongst the prizes to be awarded that evening is the John Atkinson Trophy which was commissioned by the club in memory of a much loved and respected member who sadly passed away in tragic circumstances in 2016.

The trophy is awarded annually on the basis of a ballot of members to the member who is ‘considered to have done the most for the club during the previous year’.

Depicting a road cycle, this unique trophy was crafted in Sterling silver by Steve Viney, and it is hoped that members will see this as both a lasting memorial to John and a means of recognising the efforts of the member “who is considered to have done most on behalf of the club”.  I have attached a photograph of the trophy for your information.

This year’s ballot will be held at the next club General Meeting which commences at 19:00 Monday 13 November 2017 at the Three Horseshoes public house, Wickersley.

It is hoped that the trophy will be presented by a member of John’s family at this year’s annual presentation evening.

For the award to have the status which it deserves it is important that ALL members consider making a nomination and that as many members as possible participate in the ballot of members.

The following methodology will apply:

a)  Members will be permitted to nominate only one person each, who MUST be either a life, honorary, full, junior or 2nd claim member of Rotherham Wheelers Cycling Club.

b)  Nominations may be made at any time from the date of this notice.

c)  Nominations should be made either in person or by email to the club treasurer by 24:00 Saturday 11 November 2017.

For all the members that have expressed a wish to go to Derby Velodrome on 26/10/17, could you email your confirmation to iwortley@aol.com please? Along with your height, frame size & shoe size if required. I will replywith bank details if you wish to use a bank transfer.